Unfortunately for taxpayers across America, to the National Institutes of Health (NIH), “BLT” means the latter. You’re paying for a lot of BLTs…and we’re definitely not talking about sandwiches.

A new White Coat Waste Project (WCW) investigation has uncovered that the NIH is actively funding over $27 million of research approved to use Human Fetal Tissue, also known as HFT. That $27 million is just the beginning — the NIH expects to spend over $88 million total on HFT this year.

Out of the current $27 million pool, $21.6 million has been disbursed by Dr. Fauci’s department, the National Institute of Allergy and Infectious Diseases (NIAID). In other words, Dr. Fauci is funding around 80% of current NIH experiments involving HFT.

Bottom line: WCW’s new analysis reveals Fauci is funding more HFT experiments on animals than anyone in the USA. Add in his #BeagleGate experiments, and it’s a recipe for disaster. 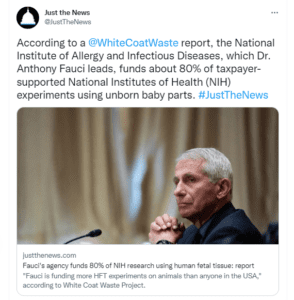 In one NIAID-funded experiment our investigators uncovered, mice were implanted with minced pieces of fetal Bone marrow, Liver, and Thymus to make their bodies mimic the human immune system — or, in the words of the experimenters, “BLT-humanized mice.”

But the horrors don’t end there. After creating the Franken-mice, experimenters infected them with HIV, decapitated them, and removed their brains. 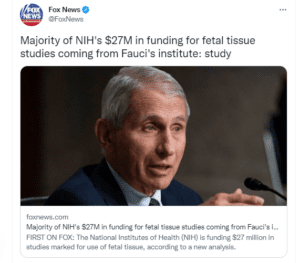 In another Fauci-funded experiment, “mice were constructed by implanting a sandwich of human fetal thymus-liver-thymus tissue,” after which they were also implanted with “two pieces of autologous human lung tissue…implanted subcutaneously into the left and right back.” These “BLT-L” (Bone marrow, Thymus, Liver, Lung) mice were then given bone marrow transplants, and used to study Zika Virus, and respiratory diseases, such as MERS.

In yet another experiment, ‘humanized mice’ were infected with COVID-19. 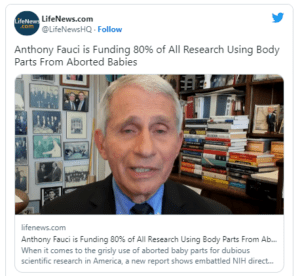 Brace yourself. It gets even worse.

In one of the ‘crappiest’ Fauci-funded experiments we’ve ever discovered, “double humanized” BLT mice “were given fecal transplants with healthy human donor samples via oral gavage.”

In other words, the lab-built mice were force-fed human waste.

Ever wonder what a mice implanted with a human lung looks like? Guess no more:

What many people fail to realize about HFT experiments is that they are almost always animal experiments. HFT is usually implanted into animals (primarily mice). HFT research has led to some extremely dubious creations…like transplanting human fingers onto the backs of mice. Other taxpayer-funded experiments include transplanting eyes, intestines, bones, and other human fetal body parts into mice, rats, and rabbits. 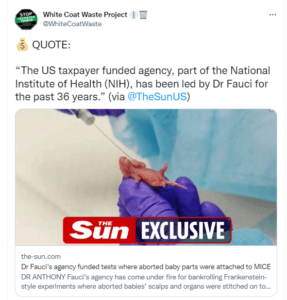 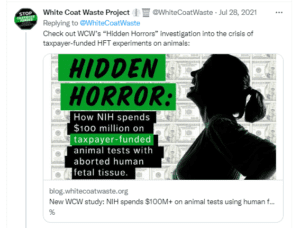 As WCW and Pro-Life San Francisco wrote in an op-ed in 2019:

That remains true to this day.

So, too, does the importance of transparency. That’s why we’re working alongside lawmakers to pass the COST Act, which would put a public price tag on all taxpayer-funded animal experiments, and defund rogue labs that don’t comply.

Taxpayers have a right to know who’s paying the bills — and who’s cashing the checks.

Take action! Contact Congress, and tell them to pass the COST Act today!

Like publishers clearing house check winners..make the rich abusers mug with the loot they received from us taxpayers. We deserve to know who’s spending taxpayer $ and where🤔🌍🌎😡🌏✌️