Every year, in a process called “appropriations,” Congress sets the budget for federal departments and agencies — determining how much money they will get, and how they are allowed to spend it. Appropriations take a while because it’s hard for Congress to come to an agreement on…well, anything, really.

But issues related to taxpayer-funded animal experiments often rise above the fray of partisan bickering — which is why White Coat Waste Project (WCW) has always worked with lawmakers on both sides of the aisle, and why we’ve been able to achieve so much under Republican and Democrat administrations alike. We’re proud to be a big tent! 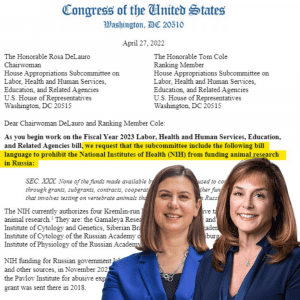 Now, with Congress in the middle of appropriations season, a bipartisan array of lawmakers is working hard to ensure that no more American tax dollars are sent to Vladimir Putin’s animal labs.

In case you missed it, we recently revealed that over $700,000 of your money was sent to the Kremlin-run Pavlov Institute of Physiology in St. Petersburg, Russia, where it was spent on cruel and wasteful experiments on cats. This wasn’t a grant we dredged up from long ago — the experiments were funded by the National Institute of Health (NIH) as recently as 2021!

On April 27, Reps. Lisa McClain (R-MI), Elissa Slotkin (D-MI), and 27 bipartisan colleagues sent a letter to the heads of the appropriations subcommittee that sets the budget for the NIH. The letter (available in full below) references WCW’s investigation and asks the subcommittee leaders to prevent the NIH from sending one red cent of your tax money to Russian animal labs. If that sounds like common sense to you, you’re not alone: a recent poll from Lincoln Park Strategies found that 76% of Americans supported canceling grants to Russian animal laboratories. 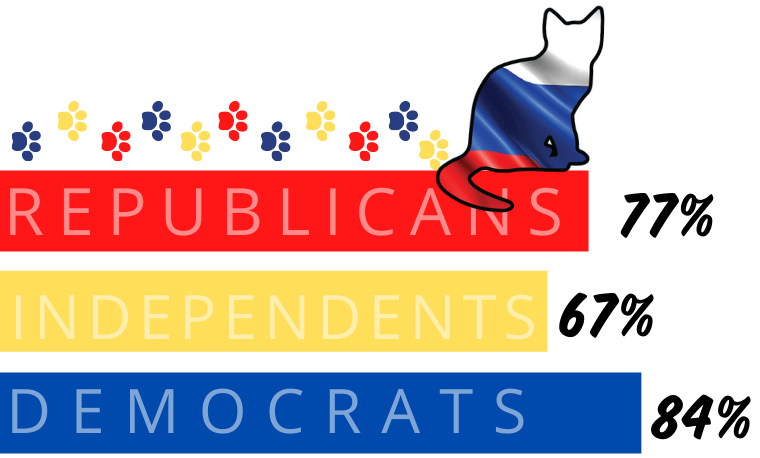 The NIH is addicted to spending. As our “Worldwide Waste” report found, 353 labs in 57 countries are eligible to receive U.S. funding, and an estimated $140 million was shipped to foreign animal labs in 2020.

U.S. taxpayers shouldn’t have to bankroll international animal torture. Rep. McClain’s bipartisan request, if approved by the Appropriations Committee, would be a step in the right direction — and a victory for taxpayers, animals, and common sense.

NEW: The NIH provides funds to Russian labs that torture animals, including $550,000 to a Russian lab that surgically removes parts of cats’ brains and forces them to walk on treadmills.

A group of lawmakers are trying to block the funds.

So would her AFAR Act, which would prevent any taxpayer money from funding animal experiments in countries deemed “foreign adversaries.”

As the Appropriations Committee finalizes its spending bills for the year, we’ll keep you posted if Putin’s animal labs are finally defunded. While we’re waiting, though, you can help! Tell Congress to pass the AFAR Act today!

“ANIMALS RUN NO RISK OF GOING TO HELL, THEY ARE THERE ALREADY.” – Victor Hugo.

Ask just stated it is inhume and no animal should ever be forced to suffer.

I know that you have already done everything possible to stop no longer help Russia regarding gaining any type of money from us. We are no longer accepting any type of service from them or providing them with any type of
service we have been allowing them to receive from us. I would like for you to add the AFAR act, which would prevent any taxpayer money from funding animal experiments in countries deemed “foreign adversaries”. The United States must stop funding “horrific” animal experiments performed in Russia.

Pass the AFAR ACT ! Stop NIH, any laboratory using any animals, causing any pain, any suffering to them for any research !

The horrible treatment of animals on this planet is absurd! I hope every human that is intentionally harmed in animal goes straight to hell with no questions ask. Those are God’s creatures we have no right. The intentional abuse and mistreatment is arrestable offense in my opinion and what you do to others should come right back to you so then there’s that and others is any other mammal. A mammal is any warm-blooded animal that bleeds red blood, breathes the same air we breathe, has a mother, and a face! Leave them alone! They are God’s creatures not yours.

Innocent and helpless Animals should not be subjected to cruelty in labs .

Animals have no voice so we must speak for them; stop animal testing, it does more harm than good.