OP-ED: We Must Stop Funding Dangerous Animal Tests at Home And Abroad

We Must Stop Funding Dangerous Animal Tests at Home And Abroad

Originally published as a Newsweek Op-Ed.

More than two years after the start of the coronavirus pandemic, the World Health Organization (WHO) has finally acknowledged that a leak from a U.S. taxpayer-funded animal lab in Wuhan, China, may have unleashed COVID-19 on the world. In its June 2022 report, the WHO stated that the “lab leak hypothesis” merited “further investigations.”

Let’s rewind. For years, leading scientists—as well as intelligence experts, including the Federal Bureau of Investigation—have raised the possibility that dangerous coronavirus gain-of-function experiments involving bats and humanized mice, funded by Anthony Fauci‘s white coats at the National Institute of Allergy and Infectious Diseases, accidentally spread the virus from inside the Wuhan Institute of Virology. This theory was written off as “disinformation” by the left-wing media, social media outlets, and Fauci himself.

After the WHO’s report, those who fought for proper acknowledgment of the lab leak theory can’t help but feel vindicated; yet definitively proving the origins of COVID-19 may prove difficult, if not impossible.

China did not take kindly to the WHO’s new report, calling the lab leak theory “a lie concocted by anti-China forces for political purposes.” This is important because cooperation between the WHO and the Chinese Communist Party would be necessary for any in-depth investigation into the origins of the virus. After over two years of stonewalling and obfuscation, that cooperation is unlikely.

But even if investigators can never conclusively determine the origins of the COVID-19, this report proved that gain-of-function research is dangerous and must be stopped in the interest of protecting public health.

Gain-of-function research—intentionally engineering viruses to be stronger and more transmissible—is inherently dangerous. Records show that the Fauci-funded Wuhan lab engineered bat coronaviruses to be 10,000 times stronger than their natural counterparts, severely sickening and killing the animals infected in the experiments.

We’ve known about these risks for years. From 2014 to 2017, a federal moratorium on funding for gain-of-function research was in place following a series of lab leaks in the U.S. and China. The funding ban was lifted in 2017, reportedly at the behest of Anthony Fauci, with little to no input from the White House. Three years later, the world shut down due to COVID-19. 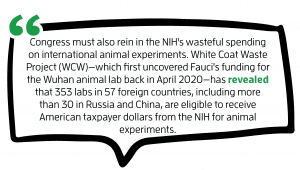 Every corner of the country was affected by the pandemic and Congress must act to reduce the chance of it happening again. The bipartisan Pausing Enhanced Pandemic Pathogen Research Act would freeze National Institutes of Health (NIH) funding for dangerous gain-of-function research for five years. This would give Congress and the executive branch an opportunity to revisit research guardrails and allow labs time to enhance their biosecurity, limiting the possibility of future lab leaks and accidents. 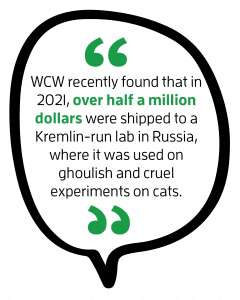 Congress must also rein in the NIH’s wasteful spending on international animal experiments. White Coat Waste Project (WCW)—which first uncovered Fauci’s funding for the Wuhan animal lab back in April 2020—has revealed that 353 labs in 57 foreign countries, including more than 30 in Russia and China, are eligible to receive American taxpayer dollars from the NIH for animal experiments. WCW recently found that in 2021, over half a million dollars were shipped to a Kremlin-run lab in Russia, where it was used on ghoulish and cruel experiments on cats.

A majority of Americans, Democrats and Republicans alike, are opposed to funding our adversaries’ animal labs. The Accountability in Foreign Animal Research Act, which we’re both supporting, would prevent taxpayer money from being wasted on animal experiments in countries officially deemed “foreign adversaries,” like China and Russia. It is a common-sense proposition (to everyone except the white coats at the NIH, it seems), and one Congress should swiftly adopt.

There is no way to legislate our way out of future pandemics, but that doesn’t mean we should continue tempting fate. As America still grapples with the vast social, political, and economic repercussions of the coronavirus pandemic, it is critical to put some common-sense guardrails on dangerous animal experiments, and stop funding our enemies with our citizens’ money. Future generations will be grateful for our restraint. 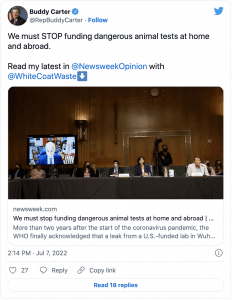 The views expressed in this article are the writers’ own.

We should be so far past any form of abuse, it’s time for all of us to take responsibility and end abuse.

I support White Coat Waste Project’s working to stop animal testing, particularly in foreign countries. Most, if not all, of these tests are worthless and taxpayers money should not be used for this, certainly not in other countries.