Hound On the Hill: Beesly Returns!

A few weeks ago, WCW brought a short but mighty lobbyist to Capitol Hill: our friend Beesly! 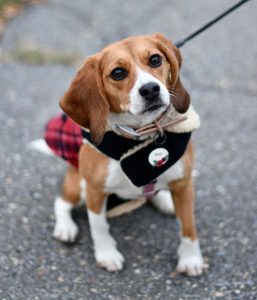 When Beesly — who was rescued from a for-hire lab that abuses dogs in tests to satisfy outdated FDA red tape — was last on the Hill, she and WCW met with members of the House of Representatives, including Rep. Brian Mast (R-FL), Rep. Dina Titus (D-NV), and Rep. Pete Stauber (R-MN). Beesly wanted to thank these Waste Warriors and longtime WCW allies for their work to cut FDA red tape and end other wasteful taxpayer-funded dog testing. It was a paw-some visit…but Beesly was ready for more.

This week, Beesly came with us to the Senate, where she met with Senators (and Waste Warriors) Joni Ernst (R-IA) and Rand Paul (R-KY). 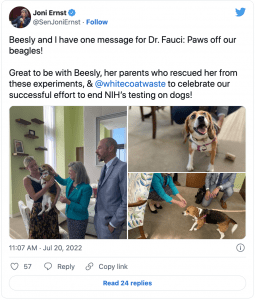 She also wanted to thank Sen. Paul for his dogged (no pun intended!) and persistent efforts to cut FDA red tape and hold Fauci’s feet to the fire over #BeagleGate. 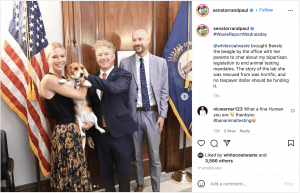 Beesly is a perfect spokesdog for WCW issues: she was raised in a laboratory, where white coats force-fed her drugs. Even though she was healthy when her experiments ended, she was scheduled to be killed. Luckily, she and her fellow lab dogs were saved by kind pharmaceutical execs (who don’t want to harm animals any more than we do).

Since then, she’s become an invaluable member of our outreach to Capitol Hill — because who could say no to this face?? 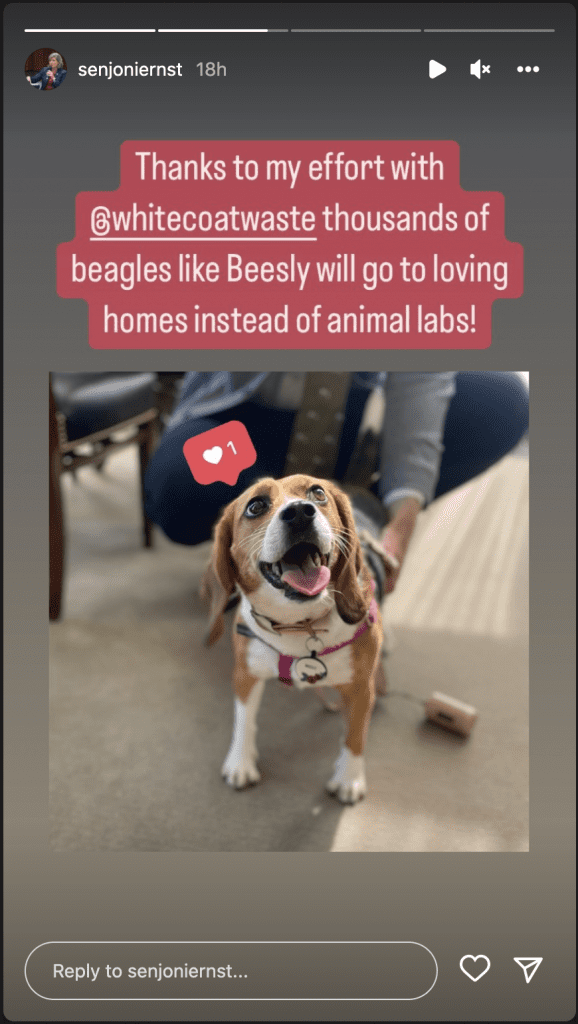 We’re so, so glad Beesly was saved — but there are thousands more dogs like her, languishing in taxpayer-funded labs. If you want to help us save dogs from taxpayer-funded white coats, please take action! Tell Congress to pass the PAAW Act today!

We must save all the Beagles being held captive and suffering horribly. There is no reason possible that can justify

yes my message to congress is please pass the paaw act. its time the nih stop experimenting on animals .they have rights .thank you.

yes my message to congress is please pass the paaw act. its time nih stop experimenting on animals . they have rights .thank you.

yes my message to congress is to pass the paaw act today. its time the nih stop experimenting on animals. they have rights. thank you.

Come on all you good people let me see you share and sign. Save the beagles, thank you x

Pass the PAAW act and save thousands of harmful experiments to these beautiful beagles. They don’t deserve to suffer needlessly.

Thank you everyone for rescuing these puppies from torture. Murder and abuse. Hold the abusers accountable! No living being deserves the evil treatment. Let’s do to the abusers what they did to these puppies.