Earlier this year, using the Freedom of Information Act (FOIA), White Coat Waste Project (WCW) exposed the U.S. Department of Agriculture’s (USDA) little-known kitten slaughterhouse that was kept hidden for nearly 50 years. Apparently, the USDA wants to keep operating in the shadows, but WCW is taking it to court.

As first reported by The Washington Post, this week WCW filed a lawsuit against the USDA for refusing to release documents about its wasteful and cruel experiments on nearly 3,000 kittens to date.

.@WhiteCoatWaste uncovered the government killing of thousands of cuddly kitties. Now the USDA is denying their FOIA requests. https://t.co/Egt5yrMYeO

In a June 2018 FOIA request to the USDA–aimed at obtaining up-to-date documents about the kitten testing program–WCW sought records including cats’ veterinary records, kitten breeding records, and internal emails about the much-criticized experiments in which 8-week-old kittens are forced to eat parasite-ridden raw meat for two weeks and then killed even though they’re healthy and could easily be adopted out.

After three months, the USDA is in violation of FOIA by failing to provide the materials, or even acknowledge the request. WCW is suing because taxpayers have a right to know how our money is spent. Earlier this year, WCW won a lawsuit against the U.S. Food and Drug Administration for videos of its now-defunct nicotine tests on baby monkeys.  In both cases, WCW is represented by the Law Office of Matthew Strugar. 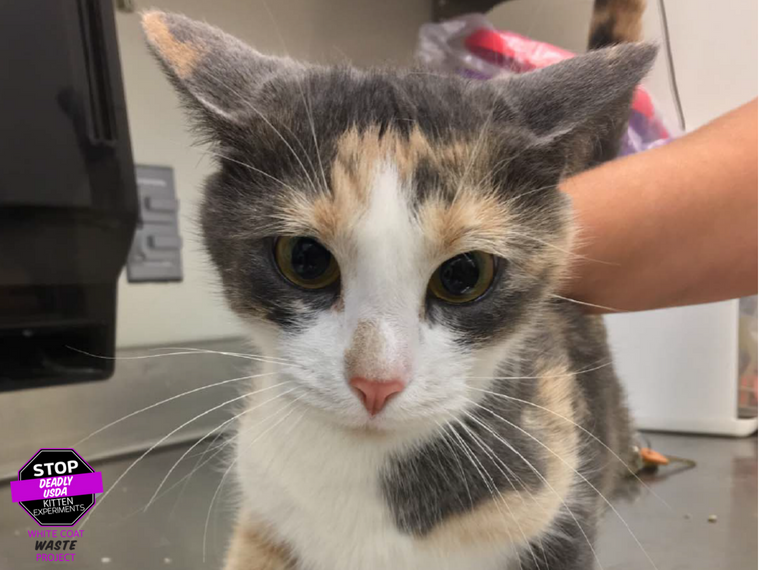 Cat used for breeding at the USDA’s experimentation facility in Beltsville, MD. Photo obtained by WCW via FOIA.

USDA is facing harsh criticism for continuing these archaic taxpayer-funded experiments. Veterinarians have panned the USDA for refusing to adopt out the kittens. Congress members have introduced the bipartisan KITTEN Act to end these experiments, and legislation passed by the U.S. Senate urges the USDA to end the experiments and adopt out the cats.

Join the fight! Tell Congress to pass the bipartisan KITTEN Act to defund these deadly taxpayer-funded experiments, and urge USDA to adopt out the cats!

Our tax money is being used in the opposite way your constituents want. Most do not know, but I’ll be spreading the word. Do not send me a form letter…not one more time

I believe that if I have to keep something that I;m doing a secret then I question my own motives. The issue of using any live creature for experiments is something that should be discussed. I am personally against asking a animal to go through pain and suffering that I’m not willing to go through myself even to cure cancer. I hope that this lawsuit forces the USDA to be accountable to the people who fund their operations. I hope that when I’m contacted to help WCW or any other organization that they will provide me with practical ways that I can help further their cause. I don’t want to receive endless form emails. If you want me to write someone then send me their contact information and let me choose if I will contact them or not. I believe that 1000 phone calls about the same issue is more effective than one form letter with 1000 signatures on it. Also, if you’re going to ask me for money then I want to do exactly how you plan to spend it. I don’t make much money however I’m happy to share it if I agree with how it will be spent.

WTF is the matter with you , why are you killing innocent kittens ? Why not use the Prisoners that will never get out of prison anyways , its the people that is the reason for these experiments anyways

EACH and EVERY ONE of US…is RESPONSIBLE>>
FOR A KINDER, SAFER, HEALTHIER and M O R E J U S T WORLD>>>>>>>>>
Without REVERENCE for ALL LIFE…there can be no PEACE>>>>>>>
The most destructive force of nature is…human nature…because it can choose>>>>>
OUR moral progress is dependent on the way WE treat ALL LIFE…tragically…WE HAVEN’T PROGRESSED>>>>>>>>>>>

Love your comment. Agree 100%. The only way to do that is by choosing Plant based (vegan) life-style. When 15 years ago, decided to do just that, I LOVE who I am, how I look, feel and live. I know, see, feel, respect and understand Mother Nature and it’s reasons like never before. It’s the BEST decision I ever made 4 EVERYTHING: health, animals, nature and people.On YouTube, Google or/and Netflix: What The Health, What’s The “Natural” Human Diet, Food Choices, Europe’s Dark Secrets, Best Speech Ever, Academy Of Nutrition and Dietetics – Journal, good Medicine – journal, Nutrition Studies, The Physicians Committee For Responsible Medicine, 101 Reasons to go vegan, $30K Poop Nutrition Food Challenge, wellfedworld.org, Uprooting The UK’s Leading Causes of Death with Dr. Michael Greger( 28 April 2016), How Not To Die – book by Dr. Michael Greger, 2 1/2 Million Years The Bulk Live On Starch Based Diets, The Food We Were Born To Eat, Dr.Colin Campbell – The China Study (book), Dr, Esselstyn, UPC-ONLINE.ORG, freefromharm.org., evolve.com, Don’t Eat Anything With a Face.
http://nutritionfacts.org/video/the-role-of-bovine-leukemia-virus-in-breast-cancer/
http://nutritionfacts.org/video/how-much-cancer-does-lunch-meat-cause/
http://nutritionfacts.org/video/breast-cancer-survival-butterfat-and-chicken/
http://nutritionfacts.org/video/eggs-choline-and-cancer/
http://www.today.com/health/eating-you-alive-new-film-claims-plant-based-foods-could-t107610
https://www.facebook.com/plantbasednews/videos/1789720841281012/
THANK YOU.

How is the USDA above all of this. Especially when Congress tells them they can’t do this with tax payer dollars. Unconscionable! Not even good science…

The world is watching you!

This waste of taxpayers dollars and abuse of innocent animals Has To Stop!!

Keep after them dont let them get away with this

I think it’s obscene that theses innocent animals are being subjected to such horrors.IT HAS TO STOP!

Only coldhearted, arrogant, selfish, misguided individual/s would allow, promote, encourage and support such vicious, perverted, absurd activities. ALL shapes and forms of abuse, torture, exploitation (laboratory “testing”, “experiments”, Zoos, “hunting” and “Farming” of other species for their body parts (fur, skins/”leather”, bonnes, eggs, milk, fish, honey, silk, wool), must end for good. We don’t need to exploit anyone (human or not) to live well, eat well, be healthy, wealthy, proud and happy!!!!! We must fight, inform, inspire every day others, to know and do better than this. When we choose Plant based (vegan) life-style, we choose LIFE. We refuse to support, encourage, allow and promote ALL forms of exploitation. It’s the BEST,FASTEST, MOST EFFICIENT WAY BY FAR. Fighting these powerful, corrupted, greedy industries is almost impossible. Time is running out. Please check out the following documentaries, videos, websites to find out more. Please do. Thank you:
On YouTube, Google or/and Netflix: What The Health, What’s The “Natural” Human Diet, Food Choices, Europe’s Dark Secrets, Best Speech Ever, Academy Of Nutrition and Dietetics – Journal, good Medicine – journal, Nutrition Studies, The Physicians Committee For Responsible Medicine, 101 Reasons to go vegan, $30K Poop Nutrition Food Challenge, wellfedworld.org, Uprooting The UK’s Leading Causes of Death with Dr. Michael Greger( 28 April 2016), How Not To Die – book by Dr. Michael Greger, 2 1/2 Million Years The Bulk Live On Starch Based Diets, The Food We Were Born To Eat, Dr.Colin Campbell – The China Study (book), Dr, Esselstyn, UPC-ONLINE.ORG, freefromharm.org., evolve.com, Don’t Eat Anything With a Face.
http://nutritionfacts.org/video/the-role-of-bovine-leukemia-virus-in-breast-cancer/
http://nutritionfacts.org/video/how-much-cancer-does-lunch-meat-cause/
http://nutritionfacts.org/video/breast-cancer-survival-butterfat-and-chicken/
http://nutritionfacts.org/video/eggs-choline-and-cancer/
http://www.today.com/health/eating-you-alive-new-film-claims-plant-based-foods-could-t107610
https://www.facebook.com/plantbasednews/videos/1789720841281012/
THANK YOU.

For what purpose is this disgusting waste of taxpayers money? No experiment is worth torturing and killing innocent kittens. This is a con job to line the pockets of the so called experimenters.

You bastards!! I spend my own money trapping neutering and finding homes for feral kittens, release adults if not able to tame! I better not find out my kittrns went to your SICKO program! I hope there is a hell! STOP!

Do the right thing

I don’t want my tax dollars used on ANY ANIMAL EXPERIMENTS!!! Instead use it on the usda members to be tested on.

This is animal abuse. This evil needs to be stopped. I think these heartless people like torching innocent animals. Animals have feelings too.

Stop experiments on kittens and killing them. Allow the kittens to be adopted

STOP THIS CRUEL TREATMENT STOP USING MY TAXPAYER MONEY ON THIS!!!

There are no blackouts, everything is transparent when it comes to hurting our animals. Don’t think for a minute that there’s some sort of cover up. Maybe just power in the wrong hands.

We all need to understand that any ”human” who has the capacity to kill or torture another living
being that desperately wanted its own life, is not a human being since Conscience does not exist.
So these Sub-Human degenerate defilements that work at the USDA parading as human beings should
face one fate and one fate only: EXTERMINATION via Incineration. That is Justice in my eyes.

The only thing driving these people is obvious to me. Money.

Please stop this torture and murder of innocent animals.

Stop all testing. Leave all animals alone. Use humans

No excuse for this barbaric practice,never was.It’s disgusting and sickening.

Which USDA division which labs and where? Give us something more specific than your indictment on the whole department.

Absolutely disgusting we need to end this!!!

What is wrong with humans?