As reported by USA Today, NBC News, and others, more than 60 Members of Congress from both sides of the aisle have just re-introduced the Preventing Unkind and Painful Procedures and Experiments on Respected Species (PUPPERS) Act (HR 1155) to de-fund “maximum pain” experiments and other cruel and wasteful dog testing at the U.S. Department of Veterans Affairs (VA).

The bill is being led once again by stalwart champions for taxpayers, veterans and dogs Rep. Dina Titus (D-NV) and combat-wounded Army veteran Rep. Brian Mast (R-FL). And the PUPPERS Act just got an endorsement from the First Family as well! 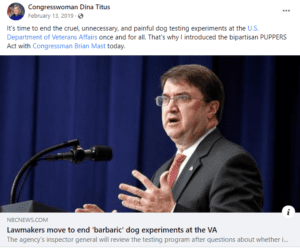 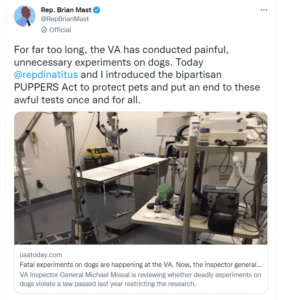 Last Congress, more than 100 bipartisan lawmakers cosponsored the PUPPERS Act, and Congress enacted legislation for 2018 and 2019 de-funding and drastically restricting dog experimentation at the VA. As a result of these efforts and WCW’s grassroots campaign first launched in 2016, existing dog testing at the VA has been cut by about 75 percent, and several new projects were canceled before they began. All told, no new dog experiments have been approved since July 2017, and only a few remain in Richmond and Cleveland. The PUPPERS Act would permanently prevent any painful VA dog testing.

Take a moment to write your Congress members and urge them to support the bipartisan PUPPERS Act (HR 1155) to permanently cut federal funding for all painful dog experiments at the VA.

Do not use dogs or cats

I support the PUPPERS Act, (HR 1155.)
I deeply oppose and resent these obscenely cruel animal experiments.
Abolish them all!

Stop this horrific and inhumane and unbelievably cruel practice! Please!

LET’S STOP ALL ANIMAL MEDICAL TESTING. THERE SHOULD BE ENOUGH SCIENTIFIC AND TECHNICAL RESULTS TO VERIFY WHAT INFO IS NECESSARY TODAY. THANK YOU!

Animal experiments are not only cruel and unethical, they are also scientifically dubious and have no place in modern
medicine and science of the 21st century. Stop the abuse.

Stop the CRUELTY on innocent dogs NOW!! WHY in a nation where cruelty to animals is a crime is it OK for the VA to WASTE our tax $$$ torturing pups?!! TIME TO STOP THIS BARBARITY!!

It is time to stop this animal abuse. this testing must end!!!!! no more wasting our tax dollars on torturing dogs
instead build more shelters, neuter all dogs, facebook the dogs so peoole can adopt. make
EVERY SHELTER NO-KILL!!!!!

Please support the” puppers dog act” which prevents very painful treatments on dogs and prohibits experimentation on dogs as well. This is a very important bill as it abolished animal cruelty. Please get behind it!

I am absolutely thrilled to read where members of Congress are introducing the Puppers Act HR 1155. It is time to end these horrible, abusive experiments on dogs. They were drilling holes in dogs heads into their brains, and for what reason? And cutting their stomachs open, and taking their organs out. This is the worst animal abuse i have ever read about…and these poor innocent dogs are suffering on a daily basis.

Stop the terrible experiments , no need for this stuff anymore.

Please vote to get rid of this terrible practice

Abuse is wrong no matter the target.

About time they put an end to this evil abuse of dogs and cats. Humans are evil

This ruling is way, way over due.

I am hopeful that Congress will support this overdue bill

TY Reps Titus and Mast a million million times for your compassion activism courage-you are Heroes and Angels saving Angels!!!!!

Stop the suffering of helpless animals.

Karma to all that abuse animals like this
STOP ANIMAL TESTING

It’s time to get proactive and stop the waste in the cruelty that is being sponsored by our government. It’s good to see for a change the congressmen and women standing up for what’s right and making it happen

I am thrilled that they are finally making positive changes regarding that the abuse that these animals go through on a regular basis. I hope they are also making changes for kittens, pigs, monkeys and any other animals that go through horrendous experimentation.

HORRIFYING! Have you no hearts?? Tis reminds me of reading about experiments in a not so long ago WW2 individuals doing experiments on innocent beings. These Animals have rights; they feel, have emotions, hurt, cry, & have been abused far too long by a so~called “humane society”…are you kidding me?

This is an unimaginable abomination and must be stopped immediately.

Put an end to this waste of money and to the extremely cruel practice of torturing and killing beagles of all dogs. The sweetest, friendliest dogs in the world. I am sure the veterans would not support this. I know my brother who I take to McGuire often does not approve of the experiments. Please, for God’s sake stop them.

This horrible inhumane experimenting and poisoning dogs needs to STOP NOW!! No need for this. This is the is the 21st Century. We should know better by now,.

Please vote to stop all animal testing, abuse and captivity. Please make this a nation wide law immediately. And please, please include a clause to let all animals to be adopted instead of euthanized. Let’s give them a chance to feel what love, care and freedom means.