Starting in 2018, and every year since, WCW-backed language defunding wasteful and cruel dog and cat experiments at the Department of Veterans Affairs has been included in federal spending bills — and this year is no exception. The House Appropriations Committee, which sets the budgets for various federal agencies and departments, recently released its Fiscal Year 2023 spending bill for the Department of Veterans Affairs. 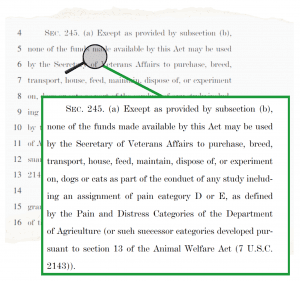 The inclusion comes after WCW rallied Rep. Dina Titus (D-NV), Rep. Brian Mast (R-FL), and 29 other bipartisan Members of Congress to send a letter to VA funding panel Chair Debbie Wasserman Schultz (D-FL) and Ranking Member John Carter (R-TX), asking for a prohibition on funding wasteful and cruel dog and cat experiments. Their letter (read it below!) noted some of the VA’s animal testing missteps, and pointedly stated “we believe the VA should focus its limited resources on improving the lives of veterans instead of wasting taxpayer dollars on cruel and ineffective dog experimentation.”

Meanwhile, the VA is still sticking to its Congressionally-mandated plan to phase out ALL experiments on dogs, cats, and primates by 2025 — and WCW continues to rack up wins against wasteful VA white coats. Recently, we ended the terrible ‘puppy heart removal’ experiments at the St. Louis VA. We also ended the Cleveland VA’s “cat-stipation” experiments. To date, our campaign has cut the VA’s dog testing by over 80 percent!

Though the VA’s 2023 spending bill still needs to be voted on by the full House and Senate and signed into law, we feel confident that the prohibition on painful VA animal experiments will make it across the finish line once again.

Thank you to Reps. Titus, Mast, Wasserman Schultz, and Carter for their outstanding leadership, and our friends, allies, and grassroots supporters for continuing to hold the VA accountable!