100k Taxpayers Tell VA To Stop De-Braining And Crippling Kittens On Our Dime!

You can’t ignore this roar: More than 100,000 taxpayers have signed our petition demanding the Dept. of Veterans Affairs (VA) stop its wasteful, cruel, and extremely disturbing kitten experiments and adopt out the survivors. 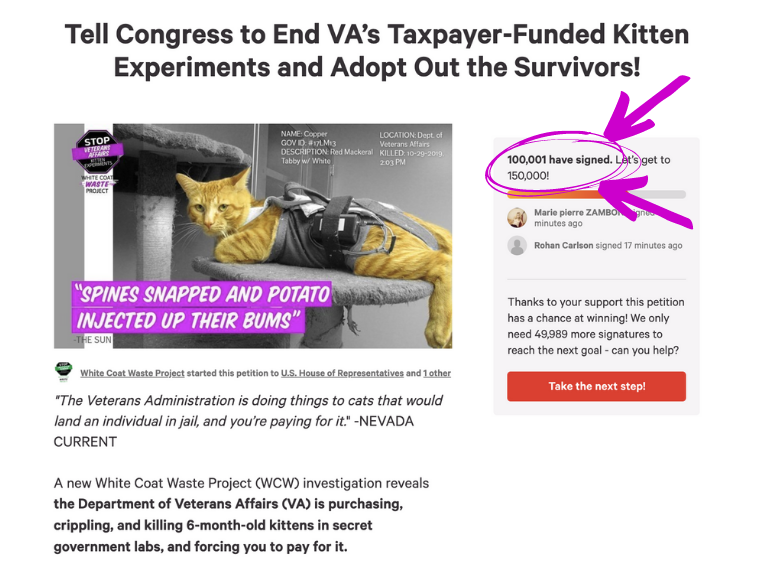 Our petition has reached 100,000 signatures but it’s not too late for you to add yours!

Are you listening, government white coats? It’s got to 🛑!

White Coat Waste Project recently uncovered how the VA buys, cripples, de-brains, and kills healthy six-month-old kittens in three secret taxpayer-funded labs… and they’re spending $11.1 million of your money to do it!

Not only that, but the VA is hiding details in violation of federal law. (Yeah. We’ve sued.)

Does that sound OK to you?! We sure don’t think so!

And as the incredible response to our new petition shows, neither do you!

🔥 Now we’ve got more 100,000 taxpayers demanding the VA stop its taxpayer-funded kitten experiments, and adopt out the survivors. 🔥

Last year, we shut down the government’s biggest cat lab—the USDA’s notorious and gruesome “Kitten Slaughterhouse” lab in Maryland, where dog and cat meat, some purchased from “wet markets” in China, was fed to doomed kittens.

More than $22 million tax dollars were squandered. More than 3,000 kittens were killed.

And with the help of our 2 million members, and powerful allies in Congress, we got that house of horrors shut down.

The urgency couldn’t be more clear. “The Veterans Administration is doing things to cats that would land an individual in jail, and you’re paying for it,” is how the Nevada Current put it in a recent story—one of many that’ve come out about our investigation into the VA’s disgusting, depraved cat experiments.

We hope you will join the fight! Please take a moment to write and urge Congress to defund VA’s kitten labs and adopt out the survivors!

This is horrific and criminal….completely unacceptable

Remind Congress & the VA that their animal testing is not based on decades of quality statistical evidence that it is relevant to human biochemistry. These bizarre VA lab experiments are only – proof of concept – curiosity experiments that contribute nothing to human medicine. Also, these VA experiments are riddled with low safety protocols & high risk botched surgeries that kill & maim cats. Needless devaluing of life for no real medical information. This lack of responsive oversight is just de-facto deregulation & has resulted in a race to the bottom in public research ethics & funding. Government agencies that act unaccountable & unjust to the public are just corporate pawns. Our democratic society should do much better than this.

All this Crap that they do to these poor animals is UNNECESSARY ! I Do Not want my tax money to go to ANY ANIMAL EXPERIMENTS!!

l am so AGAINST ALL ANIMAL CRUELTY ESPECIALLY FUNDED BY OUR TAX MONEY !!!!!!
BUT l have NO SPARE DOLLAR !
I can NOT Donate, even tho l Want to.
All l can do is Sign & Share petitions Wish l could do more. I dont even have Internet , Wi Fi, or Cable,
lm old & handicapped, & always broke !!!! Send the Info. to All the Billionaires in America, & maybe even
in The World. THEY must need some
Tax Deductions, & some may even
Truly Care about Animals……they may even Give to Stop the Cruel Chinese & Korean Dog Meat Farms.
Lets Hope !