We’ve got BIG news — and it will make a BIG difference to taxpayers, animals, and the white-coat-industrial complex.

On Thursday, June 30, the House Appropriations Committee passed the bill that funds the National Institutes of Health (NIH) for 2023. In the bill, one key White Coat Waste Project (WCW)-backed measure was included that takes aim at Worldwide Waste at the NIH: 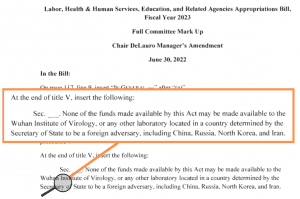 The historic legislation is a direct response to WCW’s lobbying and investigations exposing NIH funding for cruel and wasteful animal experiments in countries deemed “foreign adversaries.”

In March, we revealed that a Kremlin-run Russian lab received nearly $550,000 in 2021 for wasteful and cruel ‘zombie kitten’ experiments. We were also the first to uncover in April 2020 that the Wuhan Animal Lab’s dangerous gain-of-function coronavirus experiments on bats and humanized mice — believed by many to have caused the pandemic — were funded by U.S. taxpayers. In total, 32 animal labs in Russia and China are currently eligible to receive taxpayer dollars via the NIH.


This major win follows Congressional action inspired by WCW’s campaigns. On April 27, Reps. Lisa McClain (R-MI), Elissa Slotkin (D-MI), and 27 bipartisan colleagues sent a letter asking the Appropriations Committee to prevent the NIH from shipping your tax dollars to Vladimir Putin’s animal labs. Rep. McClain has also introduced the WCW-backed AFAR Act to prohibit tax dollars from funding animal experiments in countries deemed ‘foreign adversaries’ by the U.S. government.   The measure approved by the Appropriations Committee — which was introduced by Rep. Chris Stewart (R-UT) and advanced thanks to the outstanding leadership of lawmakers including Reps. Rosa DeLauro (D-CT), Kay Granger (R-TX), and Tom Cole (R-OK) — integrates elements from both initiatives.

An overwhelming majority of Americans want to defund animal labs run by our adversaries. WCW and its supporters across the country have been urging lawmakers to enact both of these measures that protect animals and taxpayers, and Congress members on both sides of the aisle who control NIH’s purse strings have done just that.

In one fell swoop, Congress has just taken monumental action to completely defund: 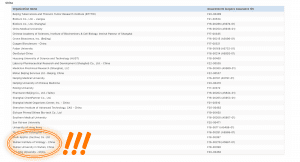 The NIH has authorized these labs in China to receive your tax money. This bill defunds all 29 of them and all 3 in Russia. Here’s NIH’s whole list of authorized foreign white coats.

It’s impossible to overstate how much of a BFD this is in the fight against taxpayer-funded animal testing. If this language stays in the bill (and we’re leading the fight to make sure it does!) it’s the War on Waste equivalent of “voting to withdraw all American soldiers from foreign countries.”

“They have refused to allow a real investigation into the origins.”

The House Appropriations Committee approved a ban on sending funding to the #WuhanLab at the heart of controversy over the origin of #COVID19. https://t.co/XIceyYQqfj

American taxpayer dollars were funneled to the very Chinese lab that is likely responsible for COVID-19.

My amendment will defund all research labs in China, Russia, North Korea and Iran, including the WIV. This inexcusable mistake demands correction.https://t.co/LUytCEaGNv

The bill now heads to the entire House of Representatives for a vote, then to the Senate, then to the President’s desk. We hope this critically important language will remain intact throughout the legislative process!

Thank you for your extremely important work!

Please complete the defunding of these institutions as stated in this bill before The Congress Of The United States Of America. Sincerely, Alfred Lewandowski

This unconscionable waste of taxpayer money to foreign countries to fund abuse of animal “studies” MUST STOP!

Thank you for listening, these are countries that cannot be trusted. All animal testing should stop.
Humans need to stop causing horrible harm and pain on helpless animals.

Thank God we are waking up to this, our money should never be used to harm any animal especially in foreign communist countries.

Stop Animals testing … it is a cruel …

Stop all animal testing. You are destroying GOD’s creatures.

Stop the use of our taxpayers dollars for the use of lab experiments on innocent animals especially dogs and cats. The abuse and torture of these poor innocent animals is disgusting, cruel and inhuman. How about the use of some of your own children for these experiments. Our country and politicians are so corrupt. They have made mess of this entire country. They should all be penalized for their actions including jail time for their crimes against these animals

Stop the torture of animals

Stop testing on animals. This is cruel and sickening. It’s not ok to torture an animal at all.