For years, White Coat Waste Project (WCW) has been working to expose and cut burdensome animal testing red tape at the Food and Drug Administration (FDA), which forces drugmakers to poison puppies and other animals in expensive, cruel and wasteful experiments, even when they would prefer to use more effective and cost-efficient alternatives that are readily available. We’re proud that our #CutFDARedTape campaign has united industry, scientists, advocates, and lawmakers on both sides of the aisle to push for regulatory reform at the FDA. 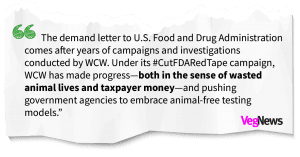 One of the big problems we’ve highlighted is that current FDA policies on animal testing and alternatives are confusing and contradictory. To address this, in our “Broken Bureaucracy” report we advocated for the FDA to “issue detailed guidance on how drug makers can avoid testing on dogs.”

Now, Congress wants the FDA to do just that. On June 22, 2022, Rep. Dina Titus (D-NV) and Rep. Brian Mast (R-FL) — both WCW Waste Warrior awardees who recently met with FDA red tape survivor Beesly — along with 11 other bipartisan Members of Congress, sent a letter to FDA Commissioner Robert Califf. The lawmakers’ letter, which you can read in full below, asks the FDA to develop “guidance for industry” — in other words, rules for drug developers — detailing exactly how they can avoid cruel and wasteful animal testing in favor of superior alternative test methods. The letter explains that although white coats at the FDA claim to accept alternatives to wasteful animal tests, there are no clear instructions for drugmakers or federal agencies to follow to gain approval for their use. 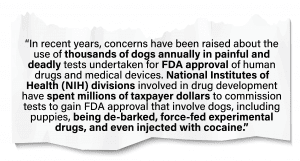 It also reveals how FDA red tape has harmed animals and taxpayers, including the following passage citing WCW’s work: “In recent years, concerns have been raised about the use of thousands of dogs annually in painful and deadly tests undertaken for FDA approval of human drugs and medical devices. National Institutes of Health (NIH) divisions involved in drug development have spent millions of taxpayer dollars to commission tests to gain FDA approval that involve dogs, including puppies, being de-barked, force-fed experimental drugs, and even injected with cocaine.”

WCW was the first to expose how NIH white coats have been wasting taxpayers’ money on de-barking, cocaine injections, and force-feeding drugs to puppies in unnecessary tests to gain FDA approval for new drugs.

Following our #CutFDARedTape campaign, the FDA has finally put reducing animal testing at the top of its agenda, announcing plans to create a new program “to reduce animal testing through the development of qualified alternative methods,” and to “spur the adoption of methods for regulatory use that can replace, reduce and refine animal testing.”

With a bipartisan Congressional coalition demanding action, we are hopeful that FDA Commissioner Robert Califf will take action to #CutFDARedTape!