Thanks to White Coat Waste Project (WCW), our network of millions of liberty-loving and animal-loving advocates nationwide, and bipartisan leadership in Congress, federal agencies like the Department of Veterans Affairs are making moves away from cruel, outdated, and wasteful taxpayer-funded dog experiments.

Over at the National Institutes of Health (NIH), though, it’s clear that Dr. Fauci and his fellow puppy-punishing white coats didn’t get the memo. Now, Congress is demanding more answers. 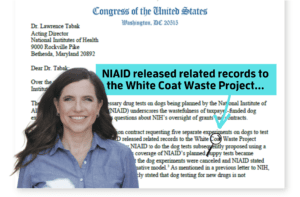 Recently as part of WCW’s #BeagleGate campaign, we worked with Rep. Nancy Mace (R-SC) and Sen. Joni Ernst (R-IA) to expose how Dr. Fauci’s division of the NIH was planning to waste $1.8 million taxpayer dollars to abuse puppies in a series of five cruel tests just to satisfy FDA red tape in order to seek approval for an experimental new seasonal allergy drug. As WCW uncovered, even the contractor Fauci hired to do the puppy tests said dog use was unnecessary, and the FDA has publicly stated, “The FDA does not mandate that human drugs be studied in dogs.” 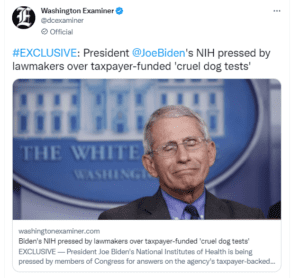 Thanks to the fast action of our grassroots advocates, as well as the tremendous leadership of Sen. Ernst and Rep. Mace, we succeeded in getting the dog tests canceled before they began.

Victory was sweet, but the story doesn’t end there — NIH’s wanton disregard for dogs, science, and taxpayers has continued raising eyebrows on Capitol Hill.

On December 2, 2022, Rep. Mace and 9 Republican and Democrat colleagues sent a letter to Dr. Lawrence Tabak, Acting Director of the NIH, demanding answers about how much taxpayer money and how many dogs’ lives have been wasted for outdated and inefficient drug tests, and what the NIH is doing to correct the problem.

In their letter (which cites our investigations extensively), the lawmakers ask why the “obviously scientifically unnecessary” dog tests were approved, as well as what steps — if any — the NIH is taking to “reduce and replace the use of dogs in taxpayer-funded experiments and testing.” 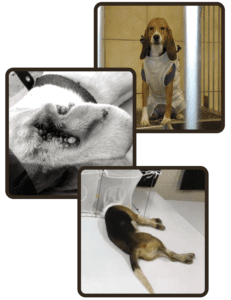 Exactly! As we previously exposed, Fauci’s National Institute of Allergy and Infectious Disease (NIAID) and other NIH divisions continue to waste millions of tax dollars on completely unnecessary and cruel drug tests on puppies and dogs in which the ill-fated animals are infested with biting flies and hundreds of blood-sucking ticks, injected with cocaine and force-fed experimental drugs.

Records obtained by WCW show that some of the puppies abused in Fauci-funded drug tests were callously named after celebrities and “vocalized in pain” before being killed.  At another lab funded by Dr. Fauci and NIAID, puppies had their vocal cords barbarically cut out so they couldn’t cry out in the lab.

The NIH’s insistence on forcing taxpayers to foot the bill for wasteful dog experiments is the problem. The solution? The bipartisan Protecting Dogs Subjected to Experiments Act, which would defund ALL dog experiments at the NIH. Take action — tell your Member of Congress to support this important legislation today!

Stop all experiments on dogs and other animals.

Using dogs and puppies must never be used as subjects for cruel and worthless experiments by pseudoscientists.