We soon launched the first-ever national campaign to defund dog testing at the U.S. Department of Veterans Affairs (VA). We set our sights on the VA because it was experimenting on hundreds of beagles and other dogs at agency labs across the country and was doing the most painful dog tests in the entire federal government. 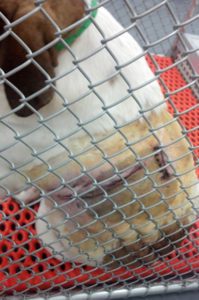 Actual photo obtained by WCW via a Richmond lab whistleblower who exposed botched surgeries and dogs forced to run on treadmills in heart attack tests.

Since then–with the support of Congress, veterans and whistleblowers–we’ve been steadily knocking out the VA’s deadly (even illegal!) dog labs. WCW shut down the VA’s wasteful spending to inject latex into puppies’ arteries, drill holes into beagles’ skulls, collapse the lungs of “friendly” dogs, cut out living dogs’ hearts, inject Dobermans with methamphetamines, and force hounds to run on treadmills in heart attack tests. 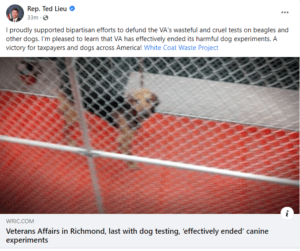 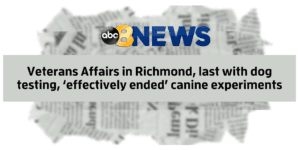 WCW’s campaign to shut down VA dog testing has been one of historic firsts, including:

In 2016, when our effort started, the VA abused nearly 220 dogs in experiments. Now, zero dogs are being tormented in painful and deadly VA testing, and we’re going to work to keep it that way and extend the progress to other federal agencies (hear that, NIH?).

WCW is the only organization to shut down any government dog tests in at least 15 years, and we’ve wiped them out across an entire agency!

Watch the blog for a deeper dive into the work we did to find, expose and defund the VA’s wasteful dog testing. 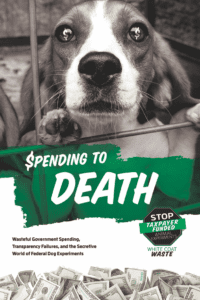 Cats, primates & other species are still vulnerable at the VA. Meanwhile, the recalcitrant VA institution has repeatedly defied the laws & obstructed transparency. Constant vigilance is the only way forward.

Animals are NOT humans and should not be compared to humans in any test. I believe the people that performed such testing need to be “tested” to see if they are human. To do something that would purposely cause pain to an animal leads me to believe they are not.

My heart is broken.

Disgusting and cruel they deserve a loving home

Why is man so cruel

Testing in a Cleveland OH ceased? If so, when? I was trying to do a search but can’t find a @search” option

Proves nothing in the way of helping humans , it just makes the dogs sick and depressed and die. What a disgrace and how disgusting and cruel. No animal should be in this wicked situation so stop it now !!!!!

Stop this animal abuse and cruelty. Dear God please comfort and protect them from harm and bless them with loving homes I pray

What they did to the dogs, cats, etc. was HORRIBLE!!!
These people should be ashamed of themselves!!! And it was criminal!!

There is still more. Work to be done on this tragic act

Thank You For Stopping The Killing Of Animals!!!

Thank goodness these sadistic excuses for human beings r being shut down!!

Don’t understand people that perform these horrific acts on living animals. Cold blooded torture 😫. Breaks my heart.. What goes around comes around. Jesus is love 🙏🏾❤

Thank you for exposing how evil and cold hearted these white coats are.

It’s evil and abuse of the most loving animals and wasting our taxpayers money!!! NEVER, NEVER should this abuse happen ever again!!

Thank You so Much for ending this Horrific act!!! Not giving up and Fighting for their rights! I am so happy to hear this! Now we have to work on Kittens and Monkeys! 🙏😇🥰

Thank you save those precious Beagles Amen

It made my stomach upside down and hurt me when I have learn that this disgusting practice was going on for years and still Is in the world. Very evil practice. Evil doers, evil government, pure evil there is no other way to describe. All involved doing this evil practice to innocent animals with all the feelings as humans are to me sons and daughters of evil from hell. Let me tell you each of them will have to answer to God. Beloved animals were created with love not to torture this way. They must be treated with love and compassion. And the evil torture was and being practice with our tax money.Shame on them. Thank you to the heroes White Coat Waste Project. God bless you all.

This disgusting!! This must STOP!! I will never understand anyone who is cruel to animal’s in any way! They are not here for man to torture!! They need love and compassiin just like you! Every animal abuser WILL answer to the cruelty they do to animal’s one day!! How would you like this treatment!!?? This must be stopped now!!

This must stop! This is soooo sad! These dogs have a right to a loving life just as you do! Every abuser ,torturor will answer to this abuse one day!

THIS IS BARBARIC SICKENING DISGUSTING…ALL ANIMAL TESTING HAS TO STOP…THERE IS NO NEED FOR THEM…ASK FOR VOLUNTEERS THEY WILL IF YOU PAY THEM….I DON’T KNOW HOW THEY CAN EVEN LOOK AT THEMSELVES IN THE MIRROR …SUCH SICK COWARDS..KARMA NEEDS TO DO TO THEM WHAT THEY HAVE DONE TO THESE POOR INNOCENT ANIMALS…..

So horrible, sad and completely wrong! Stop this insanity!

So glad this lab was exposed and closed

That’s so cruel to treat dogs I like that let’s do that to humans..they are so special in God’s eyes..and 4 the people who do that shit will never make it to heaven….period

You are making your reservations in God’s special hell for mistreating gods innocent creatures!

It is good that you are making progress in keeping dogs from being used as test subjects in inhumane and cruel ways. No animal should be harmed or abused ever. Same goes for using animals for testing cosmetics as well. Many cosmetics are not even safe for humans. Again, thank you for the progress you are making in ceasing this horrific injustice to helpless animals. They all deserve better.

Please eliminate the need for the cruel abuse of testing animals under the auspices of medical tests. We can and NEED to do better. Do better!

My stomach turns over and my heart is torn apart seeing these precious babies treated in immoral and evil ways!!! Give the animals a loving home!

I just can’t fathom people who will actually knowingly torture animals. His is as cruel as you can get. Thu Han k God for WCW for doing everything in their power to end this barbaric torture. May Fauci, Musk and all the others that profit from this have a miserable life!!!