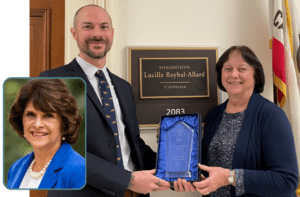 Since she first arrived in Congress in 1993, Rep. Roybal-Allard championed efforts to cut wasteful taxpayer-funded animal tests. In 1994, she helped introduce a bill to stop the government from conducting and mandating painful, expensive, and ineffective chemical toxicity tests on animals. In 1999, she helped enact legislation preventing taxpayer-funded labs from killing chimpanzees at the end of experiments and creating a sanctuary for chimpanzees retired from labs. 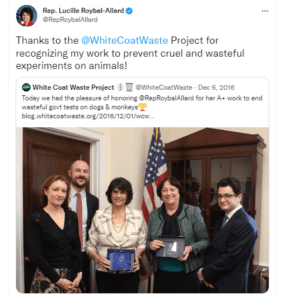 With this track record, it probably won’t surprise you that Rep. Roybal-Allard played a key role in some of WCW’s biggest wins for animals and taxpayers.

In 2016, following the release of WCW’s Spending To Death report on taxpayer-funded dog testing, Rep. Roybal-Allard sprang into action and helped secure a federal audit of government animal tests.

Building on her work to retire the survivors of government testing, Rep. Roybal-Allard worked with WCW to pressure all federal agencies to allow lab animal retirement.  Her cosponsorship of Violet’s Law and other efforts with WCW helped secure animal retirement policies at the Food and Drug Administration (FDA), the Department of Veterans Affairs (VA), and the National Institutes of Health (NIH).

When a WCW investigation exposed the NIH’s wasteful Fear Factory monkey experimentation laboratory, Rep. Roybal-Allard led a bipartisan push to hold the NIH accountable. WCW subsequently worked with the Congresswoman—a senior member of the committee that funds the NIH— to pass first-of-its-kind legislation directing the agency to devise a plan to reduce primate testing and retire monkeys. 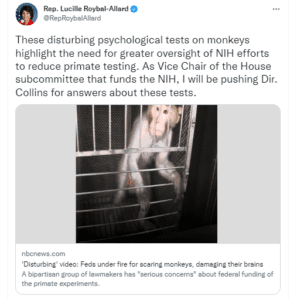 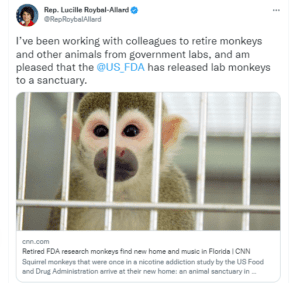 Not one to rest on her laurels, the Congresswoman then worked with WCW to enact legislation to end even more wasteful primate testing at the agency. As a result of Rep. Roybal-Allard’s leadership, we’ve cut the FDA’s primate abuse by an astonishing 44% in recent years!

She has been a champion for dogs and cats, too.  After WCW exposed the VA’s deadly and wasteful experiments on dogs, Rep. Roybal-Allard backed the PUPPERS Act to defund painful VA dog tests. She helped WCW make history: The VA has now completely ended painful dog testing. 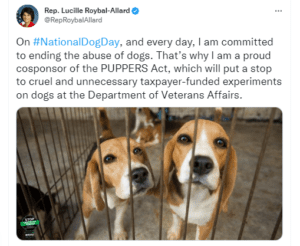 As a senior legislator who held the NIH’s purse strings, Rep. Roybal-Allard cracked down on dog abuse there, too. In recent years, following WCW’s #BeagleGate investigation, she’s called out the NIH for de-barking puppies and injecting them with cocaine and has co-sponsored legislation to defund NIH’s dog experimentation. She also led efforts to prevent taxpayer dollars from being funneled to shady, so-called “random source” animal dealers who round up dogs and cats from “free to a good home” ads or even steal them from peoples’ yards to sell them for use in experiments.

Speaking of wasteful NIH animal tests, last year Rep. Roybal-Allard secured a first-ever audit of taxpayer-funded animal testing in foreign countries after WCW exposed how hundreds of foreign labs were abusing animals with our tax dollars and virtually no oversight.  She worked with us to successfully defund the Department of Justice’s nightmarish “live tissue training” on animals, too.

Rep. Roybal-Allard set the standard for how lawmakers can fight wasteful government animal tests and win.  We’re eternally grateful for her support of WCW and decades of tireless advocacy for animals and taxpayers!

The darkness of indifference is the injustice upon all living things.